Maybe I was feeling a tad sensitive last week, but there were several comic book moments that left me all verklempt. It was also one of those rare weeks when my pull list produced nothing but hits, with two (Batman and Robin and Secret Six) in a dead heat for first place. There will be spoilers. 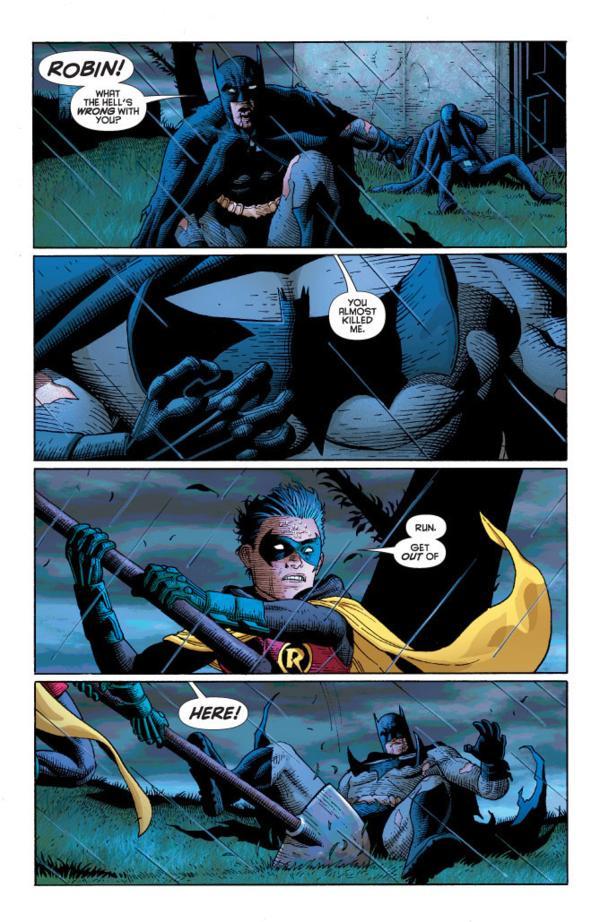 Batman and Robin #12: Damian Wayne has haters for days, but the more Grant Morrison delves into his character and unfortunate lineage, the more he grows on me. As the book opens, Damian’s mother, Talia al-Ghul, has literally turned him into a puppet whose movements are being remotely controlled by Deathstroke to kill Dick Grayson. But Talia has (again) underestimated Dick’s Batman-certified skills, as well as her son’s ability to resist manipulation. Once Dick and Alfred shut down the puppet show, Damian decides to confront his mother, who offers an ultimatum: Come back home, or consider yourself my enemy. No one will ever accuse the littlest Wayne of being cuddly, but when Damian asks her, “Can’t you just love me for who I am? Not what you want me to be?” we’re reminded that he is, after all, just a 10-year-old boy. As expected, Talia’s response is not the stuff of greeting cards — and it is thoroughly on. A moving story, plus the no-they-didn’t ending revealing creepy Oberon Sexton’s identity, adds up to one awesome issue. Dick wins the Best Line Award for his response to Damian’s concern that Talia will have him killed: “She can try.”

Secret Six #21: Am I the only one who hears Young Joc’s “It’s Going Down” while reading Secret Six? Because every time I think Gail Simone’s scripts can’t get any more gangster, she finds a bigger machine gun. This book almost never fails to deliver a satisfying blend of poignancy, spit-out-your-Coke-Zero humor and medieval conflict. Tom’s (Catman) early memories, dominated by his repugnant father, are gut-wrenching, thanks to J. Caliafore’s all-too-vivid illustrations. Back in the present day, the anti-hero is on a mission to punish the crew that kidnapped (and possibly killed) his infant son, and his former teammates are following the trail of corpses. The Sixers have seen just about everything, so you know it’s bad when they’re taken aback. After observing the sliced-and-diced remains of one of Catman’s victims, the usually unflappable Deadshot says, “All right. I don’t know what normal people think. This is &^%$ed up, right?” Yeah, but it’s a tea party compared to what Tom has in store for the sadist, metahuman thug, Loki. It involves back trouble, and very big cats.

Red Robin #12: I’d say any comic that shows Ra’s al-Ghul stammering in disbelief is worth $2.99, but in this issue, Tim Drake cracks Mr. al-Ghul’s face — at least metaphorically — with flair. With a little help from his super friends, my favorite Robin thwarts an elaborate plot to kill Bruce Wayne’s associates and bilk Wayne Enterprises. Ra’s throws Tim’s battered body through a skyscraper window, but Dick Grayson (in Batman mode) grabs him right on time. Call me a sap, but I really dug the moment when Dick asks Tim how he knew he’d be there to save him. “You’re my brother, Dick. You’ll always be there for me.” Sniffle! The Best Line Award goes to Damian Wayne, who goes off on his grandpa via walkie-talkie for sending rank amateurs to take him down: “Really, Grandfather? Ninja? I’m insulted.” Writer Chris Yost is moving on after this issue, but he’s ended his Red Robin run on a high note.

Brightest Day #1: Now this is more like it. Following the #0 issue that left about as much of an impression as zero suggests, Brightest Day #1 (or at least part of it) finally feels like an epic adventure with some surprises up its sleeve. I certainly appreciated the moment when Aquaman and Mera put a hurting on some child kidnappers at sea, and a pedophile’s death-by-undead-shark was a particularly awesome touch. However, the subplots are breaking down neatly into care/don’t care categories: Filed under “care” are the Aqua posse (including) scary Black Manta, Martian Manhunter, Hawkman and Hawkgirl. In my “don’t care” category are Firestorm (sorry, Shag), Boston Brand and Hal Jordan/Carol Ferris/Sinestro. I’m just a tiny bit burned out on these three lanterns in general. Nothing personal, guys.