Comic Blast From the Past: Hip Hop Heaven

Few things in pop culture withstand the passage of time unscathed, and comic books are no exception. Like gauchos, Jheri curls or LFO’s brief musical career, things that seem perfectly reasonable in their moment look entirely different a decade or two later.

In terms of sheer wackiness, nothing will ever top Spire’s 1970s series of Christian-themed Archie comics, which must be seen to be believed. But Hip Hop Heaven, a comic that I collected briefly in the early ’90s, is somewhere in the top five. I had forgotten all about it until I unearthed issue #2 during a recent housecleaning fit. I’m glad I held onto it, because as with Archie’s One Way, people wouldn’t believe Hip Hop Heaven (Boomtown Productions) existed without hard evidence.

In its defense, Hip Hop Heaven used issue #2 to make the case for safe sex in the post-AIDS era — a worthy goal. Milestone Comics launched around 1993, so at the time, it wasn’t exactly common to see several black characters playing pivotal roles in a single comic book. I bought it for that reason, and I was excited to see something different and indie on the shelves.

Almost 20 years later, Hip Hop Heaven reads as a comic very much of its era, one working awfully hard for the credibility. (No love without a glove? Really?) I graduated from a predominantly black university around the time it was published, and I don’t remember conducting conversations with quite as much … flair as female protagonists Coco and Feather:

There’s a preachy message about Korean-made sneakers, complete with a “What Would Martin/Malcolm Do?” splash panel, and an oh-so-’90s discussion about hairstyles and heritage: 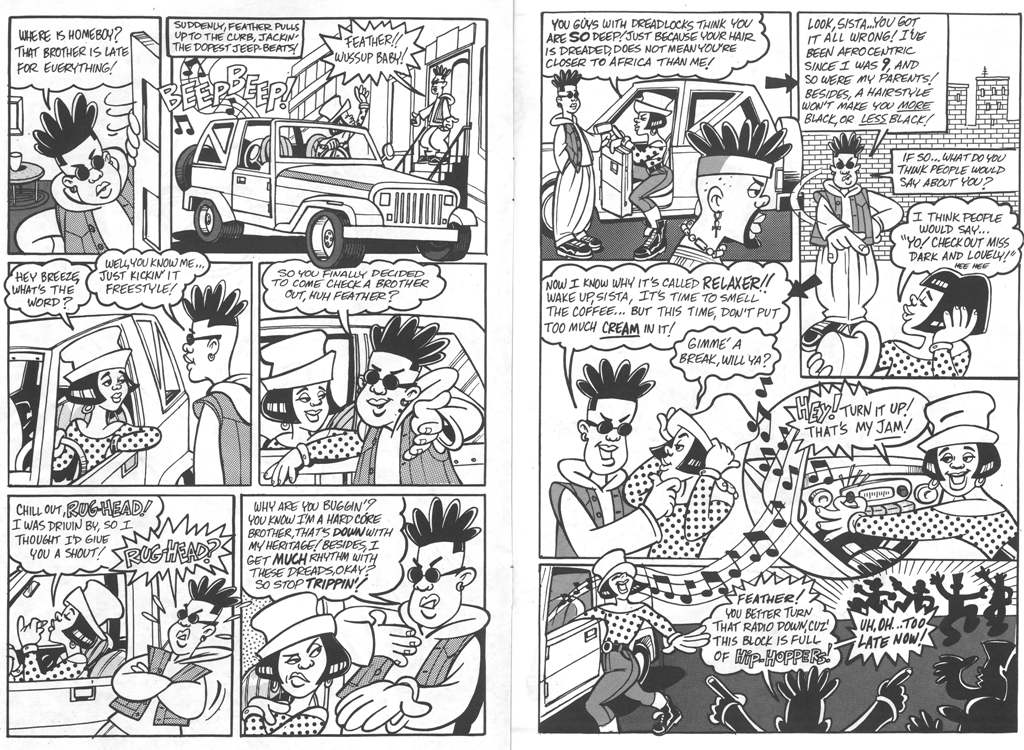 Still, creator Craig Rex Perry’s art had a fun, vibrant style — and as much as I’d like to, I can’t deny that he captured the fashion and hairdos of the time. I’ve given away/recycled/donated a lot of comics over the years, but there must be a reason I haven’t parted with Hip Hop Heaven. It’s certainly easier to explain than Archie’s Sonshine.

One thought on “Comic Blast From the Past: Hip Hop Heaven”