Because I love a Kate Spade purse as much as a Fables hardcover trade, I tend to have strong opinions about comic book fashion. V., a Gucci aficionado from way back, is no different, and we’ve had plenty of Project Runway elimination-style discussions about superhero garb.

Of course, everyone had something to say about Wonder Woman’s new costume, much of it hilarious. My favorite observation came from Tom and Lorenzo, the duo behind the brilliant Project Rungay blog: “She kind of looks like she’s on her way to yoga class. In Vanilla Ice’s old jacket. That sound you hear is the wail of drag queens the world over, all of whom wouldn’t be caught dead in this thing.”

Now that the dust has settled, we were inspired to survey the field of DC superheroines to determine who looks red-carpet ready, and who looks a hot mess. The men just didn’t interest us as much, because frankly, there’s not much to say about dudes who favor briefs and capes as a daytime look.

As for Vixen’s outfit, well, you know where we stand on that madness.

Liberty Belle: Call me old-fashioned, but I’ve always liked Jesse Chambers’ classic Liberty Belle getup. It’s a nice homage to her mom, and since she’s got that Veronica Lake thing going on, she manages to be sexy without giving away the store. Few people could get away with those thigh-enhancing jodphurs — or that color scheme for that matter — but L.B. does so with grace. What a classy dame. Grade: B+

Wonder Girl: Cassandra Sandsmark’s costume, if you can call it that, reflects the problem with her character. There’s no there there, and certainly nothing fitting a heroine. You could walk into any Forever 21 or Wet Seal in America and come up with the equivalent of what she’s wearing. Her boyfriend, Conner Kent, seems to share the notion that a pair of Gap jeans and a logo shirt are just dandy for saving the universe, but where’s the glamour? The intimidation factor? The effort? Girl, bye. Grade: D 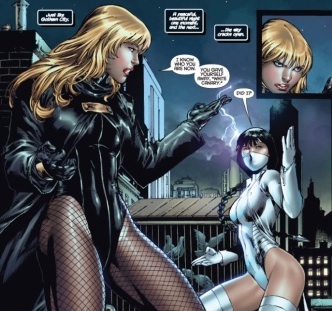 Black Canary: Artist Ed Benis’ Matrix-referencing take on Dinah Lance makes our favorite Bird of Prey as stylish as she is deadly. The long, cinched black coat, Dinah’s trademark fishnets and the motorcycle boots are gangsta in a very good way. Siu Jerk Jai deserves nothing less. Grade: A

Starfire: When you’re hot, you’re hot, but that’s no excuse for dressing like a truck stop lingerie model. I know what the Starfire apologists are thinking: “Jealous, much?” Yes. Grade: D-

Victorian Wonder Woman: Wondy went Steampunk to solve the case of Jack the Ripper in Amazonia, an Elseworlds tale set in the Victorian era. Of course, she looked fantastic in this retro version of her iconic costume: Crimson corset with a fishtail flourish, elbow-length gloves with filigree bracelets and chic, lace-up boots. The hair is very Padme Amidala in The Phantom Menace, but Diana rocked it out with the tiara. Grade: A-

Manhunter:Unless it’s got some built-in Spanx, Mahunter’s costume leaves absolutely no room for error. This is an aerodynamic, body-hugging costume that means business. In addition to being sleek and functional, it’s got that cool plating at the neck and shoulders (with matching clawed gauntlets), and the power staff is just cool as hell. Grade: B

Nimue: Nimue’s fashion has evolved to suit the times and moniker of Madame Xanadu. Her woodland nymph garb, complete with antlers and proper baubles, is hippie ethereal in an “I’m actually Homo Magi” kind of way. The knee-high lace up hoof heels are just about the cleverest shit we’ve ever seen for those times when you don’t want to be found in the forest — aaand you might not want to be found if you’ve pissed off your lover, Merlin.

Batwoman: I love everything about this costume, which somehow manages to be more menacing than Batman’s. Maybe it’s the stark black-and-red color combo, or maybe it’s the kickass footwear JH Williams III bestowed upon Kate Kane in his Detective Comics run. These are not girly boots for prancing around, but wall-climbing, roof-jumping, thug-stomping kicks. Throw in some red gloves, and you’ve got a look that’s a little bit scary and a whole lot sexy. Grade: A+