Separately, the Beatles and Batman are pop culture perfection. I love them both beyond reason. But in the year of my birth, they came together for one trippy comic book experience.

In the late ’60s, rumors swirled that Paul McCartney had died in a 1966 car accident, and that the Beatles went to great lengths to keep his death a secret. How? By replacing him with a lookalike. Really. Folks were examining album covers and playing records backward for clues, probably aided by copious amounts of herbal supplements. DC took that ball and ran with it in 1970 — the year the Beatles broke up — putting Batman and Robin on the case of “Saul Cartwright” and the “Oliver Twists” in Batman #222. Only in this version of the urban legend, Saul/Paul was the only surviving member of the band, since the other three had perished in a plane crash. “Glennan,” “Hal” and “Benji” had been replaced by actors. Heavy, man. 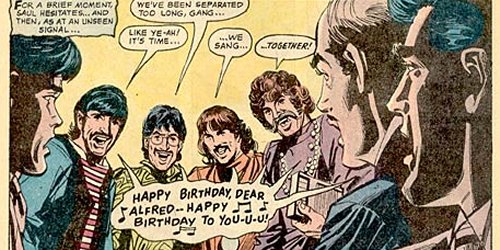 As goofy as this seems by today’s standards, the story has a kind of whimsy that I really miss in modern comics. Yeah, a lot of the stuff that was printed in decades past doesn’t hold up, and some of it was downright terrible. But you can’t deny that the Neal Adams cover rocks, and admit it; the plot sounds cool in a classic “Scooby-Doo” episode kind of way. I am not ashamed to say that I wish this Fab bit of WTF-ery was in my collection.

Many, many thanks to reader Natalie S. for bringing this to our attention!