WTF? Wednesday: Boys Will Be Boys

Making fun of vintage Batman and Robin scenarios is like shooting fish in a barrel. With an AK-47. It’s just too easy, and I’m convinced that the writers and artists responsible for these gems knew exactly what they were doing. After all, these were young, creative guys hanging out in smoke-filled studios in New York — the working-class equivalent of “Mad Men.” (“You know what’d be hilarious? What if we showed Dick Grayson crying like a jilted lover because Batman has a new squeeze? Oh, and let’s see how many times we can use the word ‘boner’ before people catch on.”)

And yet, there are still those old-school moments between Mr. Wayne and his young ward that leave me speechless. Take this one for example:

Um, why are Bruce and Dick sleeping in beds that have been pushed together, slumber-party style? Judging from the overhead narration, this is a typical morning for the Dynamic Duo. As for that cold shower — the implication being that it, like breakfast, will be shared — this is how my friend, T.B., put it: “I think it’s too late for that.”

And then there’s this: 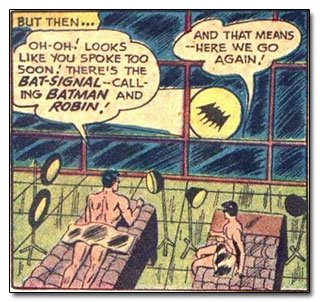 Meanwhile, from the Sidekicks Who Love Too Much files: 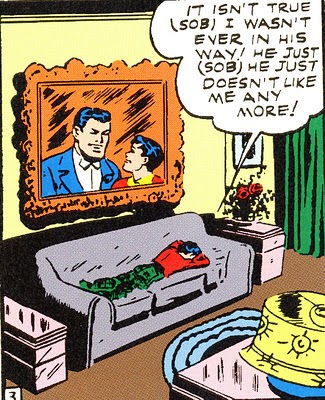 The next one is totally out of context, but I can’t imagine it being any less disturbing IN context. If Robin were 18, that’d be their business. But …

So once the threat of deadly contagion is raised, three heroes in a row think immediately of their old ladies. Batman, however, goes straight to Robin Town. Alrighty.

I will save you the trouble of saying that my mind is in the gutter, and that I am projecting 21st-Century depravity onto these innocent panels. Bygones.

6 thoughts on “WTF? Wednesday: Boys Will Be Boys”