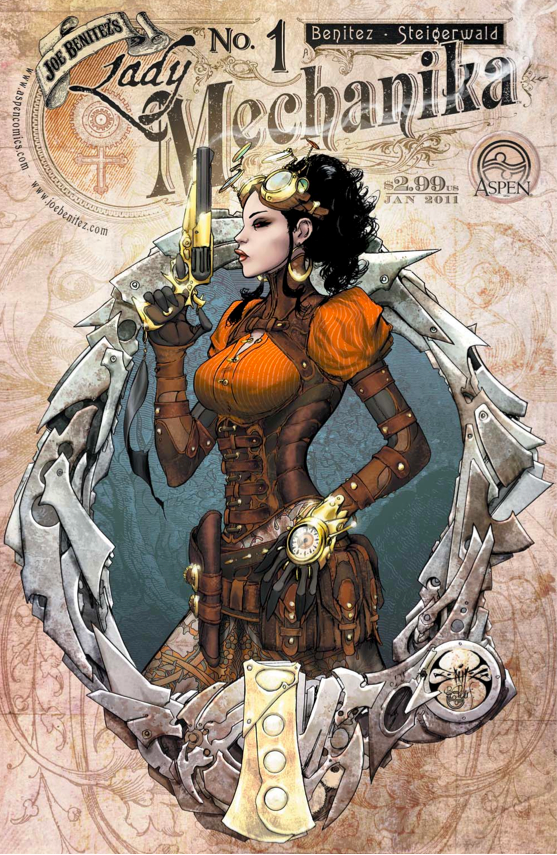 The fictional damsel in distress has run through a dark forest countless times, but not like this. A terrified young woman in a tattered gown looks at her limbs, now a horror of metal forearms and gleaming talons; “flesh and metal fused in an incomprehensible manner.” She’s being hunted. The armed predators call her a “thing.”

It’s a riveting opening sequence, one that cements Joe Benitez’s Lady Mechanika (Aspen Comics) status as one of the books to watch in 2011. His interpretation of steampunk is simply ravishing, and his commitment to this creator-owned comic book shows in the illustrations and the writing. Colorist Peter Steigerwald and letter artist Josh Reed also deserve major kudos for contributing to the book’s striking aesthetic. (To see V.’s take in Newsarama, click here.)

Lady Mechanika explored the science/superstition divide in issue #0, and the dangers of zealotry in both camps. But even if you haven’t read that issue (though I strongly recommend that you do), #1 is an excellent entry point. Benitez introduces the luminous Mechanika, billed as the City of Tomorrow, and it’s the kind of place that’s ethereal and gorgeous by day, menacing by night. Somewhere among those glowing towers, humans are being altered without their consent and against their will.

The title character is a product of those experiments, though she has no memory of where she came from. Lady Mechanika is on a mission to learn her backstory, and she’s a mighty intriguing character. She’s tough when she has to be, yet tender toward the oppressed and mistreated, like the unfortunate woman who was being hunted in the woods. She knows the feeling.

Speaking of intriguing characters, Commander Winter is one of the most formidable baddies to come down the pike. A ruthless, flame-haired villain with an eye patch and a talent for swordplay, she’s emerging as a fierce adversary for Lady M. An epic throwdown is clearly on the horizon.

I haven’t explored much steampunk, but Benitez makes it both accessible and gorgeous. Lady Mechanika’s distinctive look is a New York Fashion Week mashup of Annie Oakely, Amelia Earheart and Kate Moss. There’s a funny scene where a disguised Lady M. encounters a young fan who doesn’t believe she’s the real McCoy: “(Lady Mechanika) has impeccable style and grace, and she would never be caught dead in an outfit like yours,” huffs Annie, the daughter of a pivotal character named Professor Littleton.

This book is no empty thrill. It’s got beauty and brains, and a story with loads of potential. Even better, there are recipes — recipes! — in issue #1. Lady Mechanika is metallically delicious.