Veronica Lodge has the sassy, rich vixen role on lock most of the time, but whenever bombshell Cheryl Blossom sashays into Riverdale, it is Game Over. Even worse for Miss Lodge’s considerable ego, Cheryl knows she is hot with her red hair, dangerous curves, and short skirts — and she flaunts her assets with no apology. It’s quite a feat to make Betty and Veronica look plain.

Loving Betty (and I do) is politically correct, but Cheryl is really my favorite Archie Comics female character. She’s a brash bad girl, and something about that always appealed to me as a reserved type who wore Keds instead of Candie’s (the “fast girl” shoes of the late ’70s and early ’80s).

Plenty went over my head when I was in elementary school, but looking back, I’m struck by what a sexual character Cheryl is in the relatively tame Archie universe. I mean, in her very first comics appearance, she comes thisclose to taking off the top half of her tiny bikini on a public beach — just for kicks! This sends poor Betty into a hyperventilating panic.

That’s rather racy stuff for Archie Comics. While Veronica isn’t above wearing a scandalous bathing suit, even she doesn’t have the nerve to start straight-up disrobing. Alas, a killjoy cop tosses a towel on Cheryl and drags her off the beach for attempted nudity. I guess it’s a necessary comeuppance in a book for kids, but I came away thinking that Cheryl was kinda awesome. 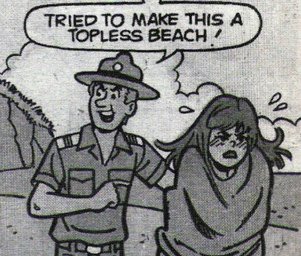 Cheryl had her own comic book for a stretch and was drawn by Dan DeCarlo (RIP), who specialized in va-va voom. On nearly every cover, she’s leaving a trail of gobsmacked teen boys and loving it. Meanwhile, the other young ladies of Riverdale are staring daggers in her direction. (Melody of Josie and the Pussycats is equally fine, but she was also dumb and, therefore, harmless. That’s a stereotype discussion for a later time.)

Of course, Cheryl is often punished for her hubris, selfishness, and outsize vanity, qualities which obviously are not desirable in real life. Even Veronica occasionally “learns a lesson,” so someone has to take the fall. It’s also interesting that in the Archie: The Married Life series, Cheryl has been further humbled as a wannabe actress who’s waiting tables in Hollywood. Bah.

Whatever she does, I will always have a soft spot — and a bit of admiration — for the gal who does what she wants, haters be damned. In comics, it’s OK to root for the shameless troublemaker who comes to town.