Saying that Sue Storm has come a long way since the pre-feminist era is like saying Joan Rivers has had a little work done. While the portrayal of female characters was sketchy across the board in decades past, Sue was practically her own category. We know her today as an incredibly powerful heroine, a leader, and the most impressive working mom in comics, but the road to respect was paved with a whole lot of insults and condescension. The source was usually her husband, Reed Richards.

It was so bad that I’ve often wondered whether Stan Lee and Jack Kirby intended to make Reed a chauvinist tool. Geniuses often fail in their personal lives, and when it came to marriage, the World’s Smartest Man was a dick. However, his chronic disrespect of Sue is so beyond the pale that it’s hilarious by 21st Century standards. Need examples? We’ve got examples, ladies and gents.

Every man knows that a shopping spree and a night on the town make up for things like being completely uninterested in what his wife has to say. Vigorous kissing not only leads to sex, but also keeps your old lady from yappin’ too much. A win-win! 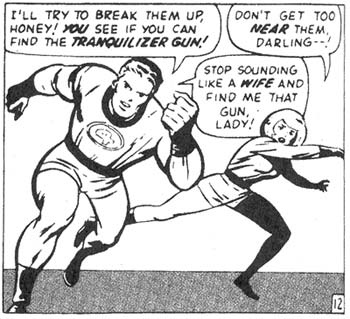 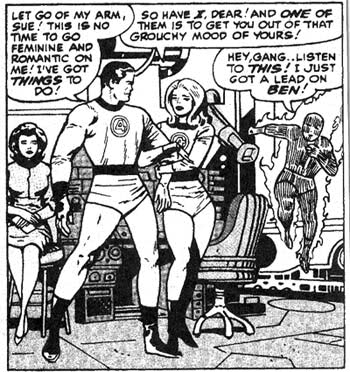 Lady, I’m wearing panties and matching tights. Please don’t undermine my masculinity further by being all clingy and … caring.

Even though I’ve got powers and wear the same damn costume as everyone else, I’m really just riding shotgun. Thank goodness I’m pretty! Sure, the sexual harassment is a drag, but that’s a necessary occupational hazard when you’re keeping everyone’s spirits up. It beats thinking. 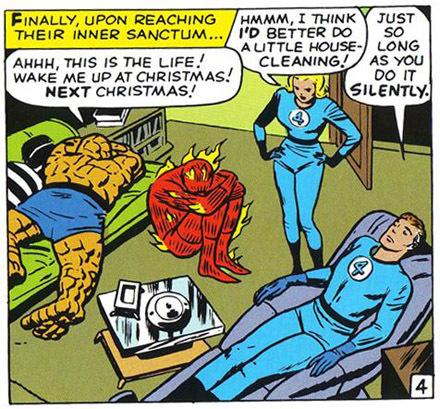 Again with the talking! Sue, no one likes a chatterbox, especially after a long day of saving the world and kicking Dr. Doom’s skirt-covered ass. And for God’s sake, have a little pride and clean up this joint. It’s the least you can do. 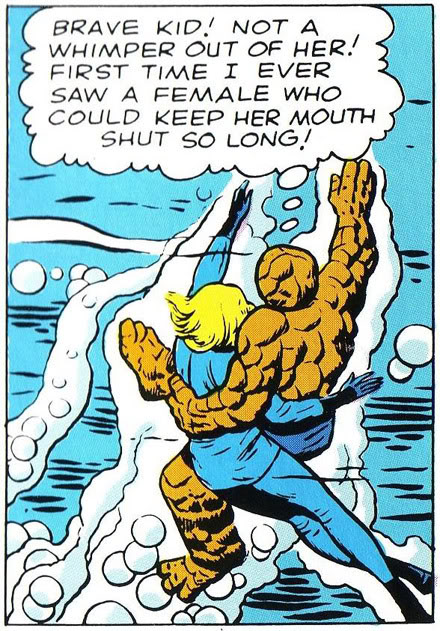 OK, this just makes me want to punch Ben in the mouth. Not that he’d feel it.

This is why women can’t have nice things. Looks like Reed’s gonna be polishing his own test tubes for quite a while. Yuk, yuk! I’ll be here all night, folks.