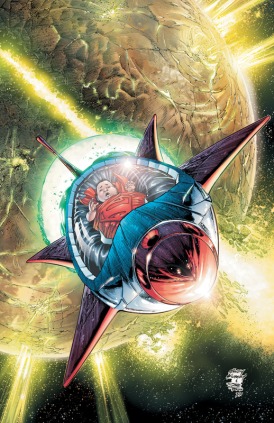 It’s the “New 52,” and the new Action Comics, and inevitably we revisit fall of Krypton. But how many ways can Krypton be annihilated? In Grant Morrison’s take on Supes’ origin, he makes subtle tweaks to how it all went down in the House of El. With minor adjustments to previous continuity, Morrison paves the road for a plethora of possibilities for future stories. We press pause on the events of issue #4 and focus on baby Kal-El making it to a planet with a yellow sun and less gravity, so he will be super. Superman’s chunky, little baby self is escorted in a rocket powered by an artificial intelligence Jor-El calls Brainiac. It is Brainiac who narrates this issue, entitled, “Rocket Song.”

Morrison telling the story from the rocket’s point of view is rather brilliant. The Brainiac technology has traveled across galaxies and has a penchant for arrogance. “Jor-El of El, the father of such a mind!” Brainiac’s mind, I presume. “Apes with atom bombs” is the way it refers to humans as the military descends upon the crash site. There is a matter of factness in the narration that feels stoic and extreme, perhaps what we imagine an alien to be. It works well in this context. 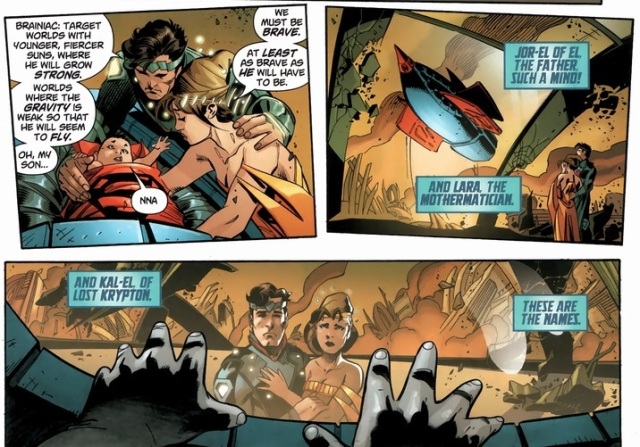 As many of you know, I am an admitted Morrison apologist. I find his reference-heavy, symbolic writing to be thought-provoking. Up to this point, Action Comics has seemed a bit more straight-laced than what we usually get from Morrison, and I’ve been waiting for the weird. Well, it is time to put your thinking caps back on, kids. Action Comics #5 is bringing the converging plotlines and a bit of time-travel fancy. Morrison will ties it all together, magically, at some point, but we are going to have to wait for it. In the meantime, issue #5 does give us a few “a-ha!” moments regarding the previous four issues.

What was that clothed goat creature that Lex thought was an alien in issue #2? Where IS Krypto? Um, is Superman’s cape indestructible? How did the U.S. Army get possession of the rocket? These questions are answered in somewhat satisfying ways. Still, for all the exposition in Action Comics #5, we are now faced with a heap of new questions. Who is the Anti-Superman Army? What the hell is Synthi-K? Wait. How is the Fortress of Solitude created? Is that the Legion? Did you just say “tesseract?”

Action Comics #5 succeeds by bringing richness and nuance to a long-loved story. But if someone picked up this comic and had not read any of the prior issues, they would be completely lost. This is where Action Comics #5 fails, because I thought that is what DC was trying to get away from. The purpose of the relaunch was to bring in new readers, particularly on flagship titles such as this. For a seasoned comic reader, the quirky, esoteric elements that Morrison adds to his stories are part of his charm. But the truth is, Morrison’s writing has made Action Comics insular after a few issues. You simply must go back to issue #1 to know what is going on.

Andy Kubert does a super job on art duties this month. He may have drawn one of most handsome Jon Kents I have ever seen. He has a knack for letting the eyes of the character tell the story in a panel. There is some really great expressiveness, which gives a lot of much needed emotion to the story. Where Grant goes off on a bit of an alien tangent, Kubert brings the issue back down to Earth with some classic (solid) comic art. I also think that Jesse Delperdang’s inks and Brand Anderson’s colors play a big part in the traditional feel of the issue.

While there is something fantastic in Morrison’s cryptic references and unabashed imagination, the feeling of “Oh my gosh! That was so good” does not dwell in these 20 pages. It is clever and interesting, but serves more as disjointed, ambiguous groundwork than an action comic.

A version of this review was published previously on Newsarama.