Greetings, lovelies. I had the distinct pleasure of being on vacation this week, so of course there were comics!

Snyder’s Detective
You can catch me almost anywhere complaining about how Batman is overrated and over exposed, so I tend to steer clear of most Batman books. Comixology had a stellar sale on Snyder’s Detective Comics, issues #871 thru #880. I bought them. I know, I am super late to the party, but wow. Snyder’s Detective is suspenseful and interesting. I love how Snyder shows that while Dick is a good Batman, he is no Bruce … and people notice the difference. Also, Snyder gave me a new appreciation for Commissioner Gordon. I think Jock’s art is great, but Francesco Francavilla is AMAZING. I know I am late to that party, too. It’s not that I am not familiar with Francavilla. I am. He has been killing it on cover art. But within the pages of Detective Comics, telling the story of Gordon’s son; he really strikes a superb aesthetic. This is good stuff people. You probably already knew that. Now I do, too. 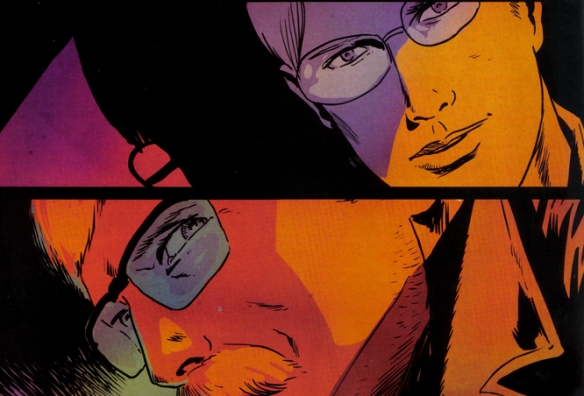 Birds of Prey FTW!
Seven months into “The New 52,” and DC books are dropping from my pull list like flies. Only a few remain, and they remain because they are that good (and maybe one out of character loyalty). Birds of Prey remains because Duane Swierczynski and Jesus Saiz are doing a bang up job. I have sung the praises of the Birds, but it keeps getting better. Issue #7 is in the thick of the arc that has been going on from the beginning. You could jump into this issue, it would still be a damn good read. But go back to the start, and read Birds of Prey from issue #1. You’ll thank me for it.

Fables
This month’s cover of Fables #115 might be one of my favorite covers … ever.

Fables has spent the better part of ten issues “seed planting,” and Willingham is slowly doling out the fruit of that. One of Snow’s seven offspring, Therese, has found her way to the land of Discardia where she is to be Queen. While Snow heads off to search for Therese, the dynamic among the cubs continues to develop as things change at home. Nurse Spratt has been found in the dungeons of Castle Dark, and is shoveling quite the snow job on the returning Fables. You can sense the awful coming. As is they way of Fables, darkness is always just around the corner. These characters eat Murphy’s Law for breakfast, lunch and dinner. I keep eating it up, too. My amygdala likes it.

Speaking of My Amygdala …
Have you read The Strange Talent of Luther Strode!? JESUS. H. CHRIST. This one punched me in the gut. It’s a six-issue mini by Justin Jordan and Tradd Moore. A geeky guy gets super powers, and the consequences of that are … intense. I devoured the first five issues when I discovered it, and was rabid for the final issue. Jordan tells an unforgettable and unexpected story and Moore’s art makes the violence palatable. Sort of. The trade comes out in April. This one might make my best of 2012 list.

The Infinite Vacation
This book is an example of how no matter the length between issues, I am still going to get it (à la Lady Mechanika). Also, issue #3 was so bloody memorable that it will be burned into my brain until death … or dimentia. Fret not, issue #4 will let you keep your lunch. There is more movement through universes and less human torture. Nick Spencer is a really smart man. I don’t know how much of this story is based on actual scientific theory or he just pulled it out of his ass, but it all works believably well. Aside from being a total smarty-pants, Spencer combined with the brilliant art of Christian Ward, make a comic unlike any other. And they do it in every issue. Aside from a few panels in this issue that come off a bit rushed; Ward’s art is stunning. His use of color, shapes and perspective is breathtaking. The Infinite Vacation is equal parts crazy and beautiful. Crazy beautiful.

Wonder … Whoa!
Welcome back Cliff Chiang! I missed you on art duties for Wonder Woman. Your work is stellar, as usual. Props to Matthew Wilson, who’s color compliments Chiang’s art and the story superbly. As for the ongoing saga of the Greek gods, Brian Azzarello is pulling no punches. For all of the prevalence of male on female violence, this story flips that script in a ritualistic mass-rape kind of way. Check Erika’s quick review of Wonder Woman #7, and read this issue. I’d love to know what you think about yet another twist on our darling Amazon’s heritage.