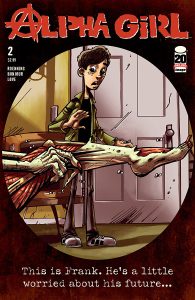 Imagine if Archie were a grindhouse film, The Walking Dead met Strange Girl, or Pee Wee from Porky’s rolled up an issue of Chew … and smoked it. These are the things I think of as I read Alpha Girl, but Alpha Girl #2 isn’t quite any of those things. With a zombie apocalypse on the horizon, this intentionally gratuitous tale of a 17-year-old girl tries really hard to be fun. Maybe too hard.

Alpha Girl #2 is just another day in the life of Judith. The super-cute, foster-home bred, chain-smoking protagonist works at the local book mart. We know she’s totally indie because of her black A-line cut hair and Ramones t-shirt. From one panel to the next, the story goes straight to the gutter when her co-worker inquires whether or not her urine is diluted. She is selling it to him. To supplement her income, Judith is in the business of selling bodily fluids to the highest bidding pervert (or in this case, just friends in need of some clean pee). We also get the pleasure of a full exposition of her “inventory.” Her festive entrepreneurial skill is punctuated by a bunch of rabid women on the loose, ripping out the jugulars of men with their teeth. As infrastructure and sanity go to hell, the reason Judith is to become Alpha Girl is set into motion.

What set off this particular zombie apocalypse? A cosmetics company’s attempt at placing pheromones in perfume turns women into raging zombies. I sense an attempt at a powerful allegory here … or not. A young girl who’s had a tough life is being set up to probably kick some major zombie ass. Perhaps, she will develop into something other than a pixie not-so-dream girl cliché … or not.

Alpha Girl #2 starts with a clear trajectory as it focuses on developing the main character. As the momentum picks up and there are some attempts at action sequences, the pacing and story become disjointed. There are panels that cut to seemingly random moments and people. I’m not sure why they are relevant to the story or how exactly we got there. I wanted to keep reading, in hope that there would be some payoff. That didn’t happen. For a book that clearly doesn’t take itself too seriously, it was proving to be a lot of work just to make sense of things.

While the story leaves some things to be desired, Robert Love’s stylized, quirky art is quite enjoyable. It is the redeeming quality of Alpha Girl #2. The ridiculously gratuitous plot is tempered by the colorful, expressive, cartoonish art. From Love’s pencils to Diego Simone’s color, the art of Alpha Girl is fun and campy, successfully.

My only gripe about the art is the cover. How they go from the striking cover of Alpha Girl #1 to this is beyond me. The cover to issue #2 is a snapshot of a new character that appears in this issue, but it seems completely out of context. It does nothing to sell the book, and belongs in an interior panel.

I am certain there is an audience for this book. I am also sure that said audience would enjoy it. Does that make it a good comic? Not necessarily. The creators of Alpha Girl get an Anarchist “A” for effort. I can sense their desire to make this story stand out and be entertaining, but the execution is flawed.

— A version of this review appeared previously on Newsarama.com.