BatWondy fans everywhere — OK, maybe just me — were brokenhearted today when DC announced that Superman and Wonder Woman are officially an item. Justice League writer Geoff Johns described it as “the new status quo,” and Jim Lee’s cover for issue #12 suggests that Wondy keeps a toothbrush at the Fortress of Solitude. 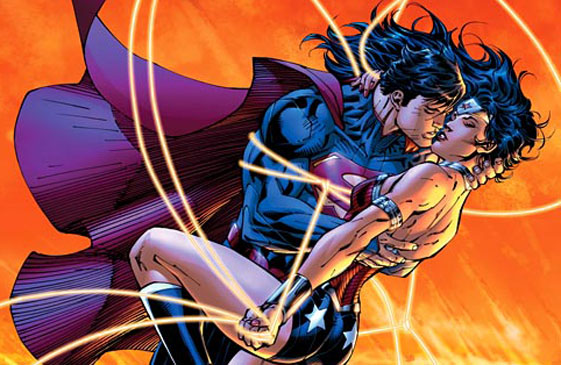 I hate everything about this idea. Aside from being predictable and bland, it dashes any hope, at least for now, that Batman and Wonder Woman will rekindle the romance that stirred so many hearts just a few short years ago. Hell, G3 based an entire series on our belief that putting them together would result in one of the hottest couplings ever in the DCU. If you missed it the first time around, our passionate argument is here.

Having dropped Justice League months ago, I admit that I have no context other than breathless press reactions. Maybe this will go in an interesting direction, and judging from the insane amount of Supes/Wondy fanart out there, there are plenty of people who are into the idea. But despite all the chatter about how steamy and controversial a move this is, Lee’s cover leaves me absolutely cold. It’s not like we haven’t seen these two in a clutch before.

Geek in the City’s Aaron Duran summed it up perfectly on Facebook: “Never mind that, apart from both being massively powerful, they have nothing in common. This just smells like suits thinking “Hey, let’s have these two hook up …  and make it sexy.”

The only good thing to come out of this is a hilarious imagining of text messages between Superman and Wonder Woman, courtesy of NPR’s Glen Weldon.