This week, dear readers, it is I who has a problem. Mostly likely you have seen this in your DC comics from last week, but in case you haven’t, here is the gist. DC is running a College Humor ad in their issues which could be considered largely offensive to women and also just everyone! The humor website has five other “great villains of nerd culture,” all of which made me lose brain cells as I read their offenses against … I don’t know … well-adjusted, casual readers? Totally the MAJORITY (haha j/k) of their readership.

Now, before I get all uppity, let me say that I realize that this was created as humor and probably not meant to cause offense to anyone (other than the stereotypes targeted). Perhaps the people who gave the go-ahead for this ad thought that everyone reading it would pat themselves on the back, knowing with satisfaction that they were not a horrible nerd. And then they would throw a party for all their nerd friends that were also not stereotyped and no. one. shows. up. Because you know, if you’re reading a DC comic, you are clearly none of these people. Except maybe the “bro” or “alpha nerd” wearing DC shirts. Oops.

It would be easy to just write this off as some crap created by out-of-touch idiots. In fact, that is exactly my opinion about College Humor’s part in this ad. But there is something more sinister afoot in regards to what DC is doing here. I mean, seriously, what were they THINKING? They are running an ad AGAINST their readers. They have essentially brought us back to grade school, and told us all about the types of people that aren’t welcome in their club. Which, by the looks of it, is more than half of their audience. Well played, DC, well played. I salute your gravitas.

I don’t even want to get into how the main image in this ad is the “Impostor,” aka an attractive female that likes nerdy things that are TOO COMMON or IS FAKING IT. I mean, WOMEN, amirite? You can’t trust those tricky minxes! What with their N64 systems and Facebook pages! Their genetic programming doesn’t allow for them to enjoy comics! Don’t make me laugh! 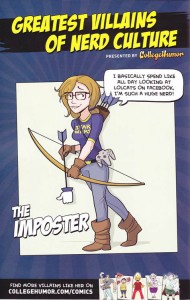 I also very much enjoy that CHILDREN are vilified for their POOR TASTE. I guess they should just KNOW BETTER. Thank you, DC comics, for running this ad. I am learning so much about the world. And god damn, if it isn’t just HILARIOUS. I have tears in my eyes!

All that aside, I think at the end of the day this ad really just makes DC looks bitter that they don’t have the rights to the Star Wars franchise. They’d be KILLING IT sales-wise with all these nerd villains! Sorry guys, I know it must be eating you up inside that Dark Horse is taking that cash pony to the bank.

Maybe next time you decide to run an ad that condemns your readership, you can make sure that no one being slandered is wearing your own damn merchandise. That’s just salesmanship 101.

Do YOU have a NRRD PROB? Email your questions to Lindsey and look for them next week!