Hello dear readers. This week we are talking about the ladies. Creators, characters, and consumers. Thank you all for your questions this week, and keep ’em coming!

“I have recently been getting into mainstream comics (mostly Marvel, aspiring for some DC) after years and years of being too afraid and not knowing where to start. I would love to read some books by female creators, or well-written stories about female protagonists. Gail Simone is next on my list, and any other suggestions you have for titles or writers/artists to follow would be very helpful!”

YOU GO GRRL way to get into them comic berks! Gail Simone is a great place to start, so you’re on the right track. Here are some suggestions for further reading:

Batwoman – There was this story arc that came out a few years ago in Detective Comics which was later compiled as Batwoman Elegy. I don’t want to spoil all the great things about this comic, but suffice it to say that the main character is entirely badass and the art is stunning. It is a must-read. Batwoman has since moved on to her own title, which is also worth getting into.

Saga – I know that this is an Image comic, not Marvel or DC, but how could I not mention it? It’s mega popular and totally mainstream. It follows a tuff lady character, and the art done by Fiona Staples is awesome. The first six issues have been released as a trade paperback for the low low price of $9.99 and it looks great on a bookshelf.

Madame Xanadu – This comic sucked me in from the outset. It’s so beautifully drawn (Amy Reeder) and the story just gets better with further reading. Somewhere down the line Kaluta snuck in to take over for Reeder for a few issues, but to make up for it they had a stellar line-up of little known female artists come aboard like Joelle Jones, Marley Zarcone, Laurenn McCubbin, Chrissie Zullo, Celia Calle, and Marian Churchland.

Wonder Woman – I can’t say that I’ve always been a huge fan of this character, but take a gander at the recent Brian Azzarello run of Wonder Woman. Collected as Wonder Woman: Blood, his take on the classic character provides a good story with no history lesson needed. Just read and enjoy.

Becky Cloonan – What can I say about Becky Cloonan? Everything that she touches turns to gold. I think she is one of the best comic artists out there today and I love her work on a rather fanatical level. She recently worked on Batman #12 and the Swamp Thing Annual #1 which were both stellar, as well as continuing work on Conan the Barbarian. The runs that she has done with Brian Wood on Demo are some of my favorite comics, period. There is never any question of reading something Cloonan has worked on, you should just pick it up. You won’t be disappointed.

Tank Girl – Because hey, why not? Alan Martin and Jim Mahfood are working on a series right now that is super cool! Jump right in there! And if you find out you like it, an absolute edition of sorts was just released called The Hole of Tank Girl which weighs about 20 pounds and is a beautiful, beautiful beast. 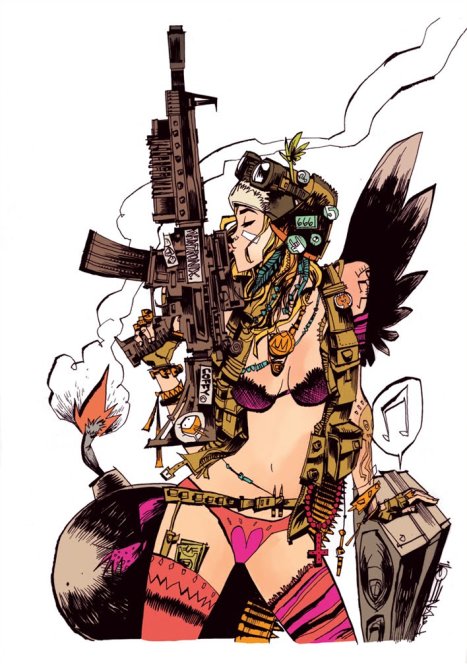 “Okay, I’m a bit of a latecomer to the comics world, but I’ve really come to love it. So now I have a problem of discovering one awesome thing after another, and not really knowing how to get caught up to the current releases. For example… Walking Dead. I was able to borrow the first 13 volumes from my library, and immediately added it to my pulls. Unfortunately, I now have this gap between where 13 ends and where I caught on and added to my pull…and I refuse to start reading my pulls not knowing what happened in between. Yes, I should just purchase the missing volumes in between, but if this is my situation every time I discover a new comic I love, at this rate, that’s a lot of money I’m dropping in large chunks. What am I missing? How do I find out about breaks between story lines where it’s good to jump in? TELL ME YOUR INSIDER SECRETS.”

My, my my. Isn’t that the problem we all face? Well, except for me. Seriously though, I feel your pain. Comics can be an infuriating and expensive mistress. There are a few ways to solve a situation like this, aside from begging your comic shop to give them to you at wholesale price:

* Buy the comics.
Yes, you already mentioned this as a possibility, but keep your options open. There are many ways to buy comics these days. I know of a lot of great stores that have buy one get one half off type deals (See The Cosmic Cat, Tallahassee, FL). There are many used bookstores as well where you can get comics at half of retail cost or lower. If you’re really desperate, get on Amazon or Ebay. There might be an incomplete set of trades you can snatch up.

* Read them in a bookstore.
I know a lot of people have reservations about just sitting around in a bookstore and reading without intent to purchase. I am one of them. But in a situation like this, it’s pretty much my favorite option. Go to your local Barnes and Noble or whatever store you have, buy a coffee, and sit down with your large stack of comics. Don’t spill your coffee on the comics. Don’t crease the pages. Put them back on the shelf in order. After you’re done, pat yourself on the back for being an exemplary customer and buy something from the store. Another comic, a novel, a board game, whatever. This last part is completely optional, but it relieves my residual guilt and gets me a new comic book.

*Go to another library.
Surely there is more than one within reasonable driving distance from you? Check out their catalog beforehand and make sure they have what you’re looking for. Library systems often have book-sharing where they can have titles driven over from another location that they are missing. Maybe they can shuttle over some Walking Dead trades for you!

I hope one of these options works for you. If not, maybe complain loudly and incessantly about it until someone offers to let you borrow their copies. Then make friends with that nice person.

“How do I introduce comics to my daughter? She is 7 and an avid reader.  She’s been to the comic book store with me a few times, but I think the setting was too overwhelming and hard for her to focus on something that she likes.  She’s a huge Star Wars: TCW fan, so I think comic books and graphic novels might be a shoe in if I can just find her niche…but how to do that?  I knew what I liked walking through the door, but she doesn’t have a ton of experience with the genre and it’s hard to know where to start…especially when you have to take into account that established characters have back stories…I’m afraid she’ll be intimidated because she doesn’t know the history.”

Luckily for your daughter there is a rapidly growing number of comics and graphic novels aimed at young readers. Since she loves Star Wars: TCW so much, I’d recommend starting there. Dark Horse has released 9 volumes so far of their Clone Wars comic, and I’m sure she would take to it quickly. You can also start out by trying the classics, like Archie Comics or Peanuts.

Don’t get too bogged down worrying about complicated character histories. There are many wonderful books with no requisite reading needed. Next time she’s in the store with you, steer her over to comics like Bone, Amulet, or Avatar the Last Airbender. Really engage her with the books. Put them in her hands, ask her what she likes about them, maybe sit down in a corner and talk about them for awhile. Hopefully by this point she’ll have already had a go at the aforementioned Clone Wars comics and be more actively interested in seeking out new reading material.

You can also make some judgement calls if you’re ever looking to get her something on your own. What else does she like? Is she a geek in training, more of a tomboy, or a fairy princess? I’m not sure about your daughter, but the art in any comic was integral to my interest in it at a young age. Seek out other visual themes she likes. There are comics starring cats, dogs, dinosaurs, pirates, and everything else! I’m sure you’ll find something she’ll be happy to read.

And if she happens to not be interested in any another titles, there is always that rather large back catalog of Star Wars comics she can start on.