Greetings and salutations. I come to you this week feeling low and defeated after failing to beat the Elite Four and Champion in Pokémon Platinum AGAIN. Sigh. Life is so hard sometimes. Anyway, this installment contains questions my cat asked me because she’s been having a really hard time with nrrd probz recently.

“I just started watching Big Bang Theory after some friends encouraged me to watch it, but it’s not really my thing. Are there any other nerdy shows worth looking into?”

I’m no television expert since I do not own one, but I DO partake in Netflix and THE INTERNET so I can help you to a certain extent. Some of these might not fall into the same category as Big Bang Theory, but they are all fantastic and you should view them if you haven’t already. And for the record, I never really liked Big Bang Theory either.

These are listed in no particular order. There is comedy and nerdery and even a comic book adaptation. Approach them in the order in which they interest you, and enjoy! 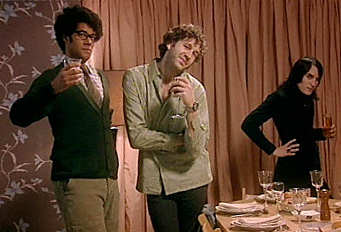 Oh and just for kicks and giggles, check out Wizard People, Dear Reader. It’s Harry Potter and the Sorcerer’s Stone completely dubbed over by Brad Neely (of Professor Brothers and Babycakes fame). It’s a little hard to sit all the way through, but I think it’s one of the more brilliant things ever made. Youtube has it conveniently broken up into chapters for your viewing pleasure.

“I heard that Hellblazer is ending. Do you have any thoughts?”

By the Joker’s face-skin do I have FEELINGS about this!

I started reading Hellblazer at the beginning of Peter Milligan’s tenure on the title, and I am weeping gently as I type this. It was actually one of the first Vertigo titles I picked up and helped greatly in easing my way into the DC Universe. I was Epiphany for Halloween this year! Jeez ma crimps.

I understand that the title has had a good run and readership is dwindling and whatnot, so it’s not an entirely unexpected move and I can’t really blame them for trying to end it on a high note.

BUT introducing him into the New 52 Universe?! Having him mingling with Superman and everyone else? I really can’t see anything good coming of that. I am largely unfamiliar with the writer taking over the title, Robert Venditti, but he has a hard act to follow, made all the more difficult with these new settings he’s going to have to contend with.

The best route I can see this comic taking is John dragging his surly, drunken ass across the pages of Constantine while cocking up everything anyone asks him to do and perhaps throwing an occasional punch at Aquaman or something. Maybe Wonder Woman can start to nurture a baffling and infuriating crush on him and take her anger out on him by challenging him to arm-wrestling competitions. Maybe I should write it instead because these are great ideas.

I don’t know what will happen. But I do know that I am scared.

“I heard that you curate an independent comic blog. Is that right, and what is the address?”

Hoo-boy, yes I do! The address is comicsunderground.tumblr.com and you should probably check it out and follow it and look there if you want to know what’s cool these days in comics and such. I’m hip to the jive, I’m down with the kids.

“What was the last comic you bought and would you recommend it to others?”

I’ve said it before and I’ll say it again, Multiple Warheads: From Alphabet to Infinity by Brandon Graham is the coolest and you should really check it out. I picked up issue #2 last week and had my eyeballs glued to it’s pages until they started to water. It’s soooo beautifuuullllll. It’s so wonderfully NOT a capes and tights production. I love it. Love it love it love it.

So YES, I would definitely recommend this title to others. I’m not saying it will enrich your life, but it probably will.

Well that’s it for this week, y’all. Look out in the next few weeks for some exciting stuff! I’ve got exclusive reviews and interviews with some awesome creators and artists! And as always, send me your NRRD PROBZ!