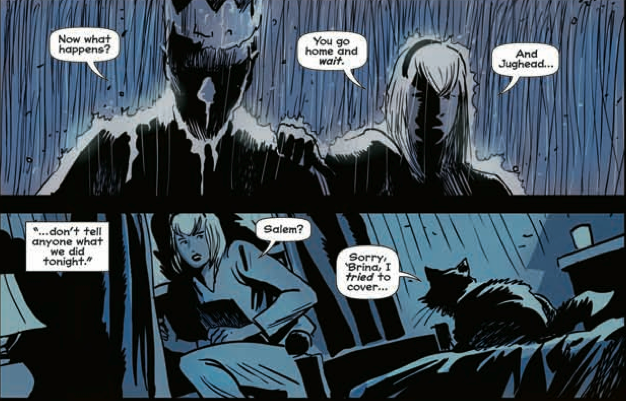 My Archie love has been well documented in the G3 space. However, I know there are plenty of comics readers who care as much about Riverdale as I do about zombies. Which is to say, not at all. But believe me, you don’t have to be a big fan of either to enjoy Afterlife With Archie #1, a new horror-themed series that knocked my socks off. “But E.,” you’re saying right now, “Give me one good reason to spend $2.99 on a comic about a bunch of goofy teenagers inhabiting a sanitized version of middle America.”

I’ll give you five.

1. The art
Franscesco Francavilla’s Riverdale is an exquisitely eerie place painted deep gray, purple and black, with bursts of crimson and yellow. Even the daytime scenes are ominous, giving AWA a look that’s just plain striking. I’ve seen some cool alternative takes on the Archie cast before, and Francavilla’s is easily one of the most memorable. He makes them recognizable while giving the crew a realistic, modern spin that fits the story’s tone.

2. The character moments
Because this isn’t your typical Archie book, writer Roberto Aguirre-Sacasa is able to show the characters interacting and behaving in fresh ways. Jughead isn’t played for a single laugh and is in the book’s most emotionally charged scenes. A surprisingly and awesomely cutting exchange between Betty and Veronica speaks volumes about the reality of their “friendship.” And is Reggie Mantle depressed? Whoa.

3. The mood
There’s a constant low-level dread hanging over the proceedings. You know that twitchy feeling you get while watching a creepy movie and wondering when the inevitable will happen? That.

4. The drama
While this isn’t Ed Brubaker and Sean Phillips’ Criminal, the story goes to some mighty dark places. The event that sets AWA in motion is genuinely tragic, and a misguided act of kindness backfires spectacularly. Even Life With Archie, consistently one of the best things on my pull list, isn’t going for broke this way.

5. The blank slate
What excites me most about AWA is that Aguirre-Sacasa and Francavilla appear to have a great deal of freedom to make this world their own — one that will intrigue old fans and pique the interest of new readers. Guys, you’re off to a hell of a start.

6 thoughts on “Five Reasons to Read … Afterlife With Archie #1”