… And they’re all from the Reimagining the Female Superhero panel!

It’s Throwback Thursday here at Girls Gone Geek, and I wanted to share a few new quotes from the panel that made the trip to SENYC worth it.

On creating accurate representations of women:
“You can get a female character up on a pedestal so high, that they’re actually boring to read about. Once in a while a female character is going to want to go on a date – it doesn’t make them less strong. They’re gonna cry – it doesn’t make them less strong. There are lots of kinds of strength, let’s explore them.” – Gail Simone

On representation and diversity in comics:
“I think it’s a little strange that there are so many new stories coming out… but so few people of color in them. Because you can do that, you know.” – Amy Reeder 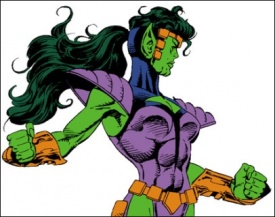 On how poorly women have been written in the past:
“[Jack Kirby and Stan Lee] found it easier to identify with Skrulls than with women.” – Ben Saunders

On Wonder Woman:
“I think Wonder Woman is the strongest warrior on the planet, and maybe the universe.

She’s not gonna pull punches. And if you want to defeat her, you better not pull yours.” – Gail Simone