The Comments Thread: Busiek Tells It Like It Is

So this morning I was checking out an article on The Beat, and as usual proceeded into the belly of the beast, a.k.a. the comments section, to see what great things men had to say on the subject of the sexualization of men vs. women in comics. The post had used a few pictures to highlight what it looks like when men are sexualized.

It started out as expected, with commenters wondering just what sort of problem women could possibly have with this unequal and oftentimes inappropriate representation. It must have something to do with our self-esteem!

Yes, of course. That’s exactly right. You really nailed it. We cower and tremble in the wake of the awesome sexuality of female superheroes. We are quelled under their empowered, fiery gaze as they lift their asses to their respective skylines, breasts struggling to share the spotlight. We are wildly jealous of these women who do not, and cannot exist.

Man, why are we so OBSESSED with this? Can’t we find a new hobby instead of continuing to tire out these dudes with rational arguments? It’s starting to make them uncomfortable!

But things take a turn when ole’ Kurt Busiek gets on the comment train, and makes some nice points to all the people using strawmen and generally avoiding the actual issue at hand. 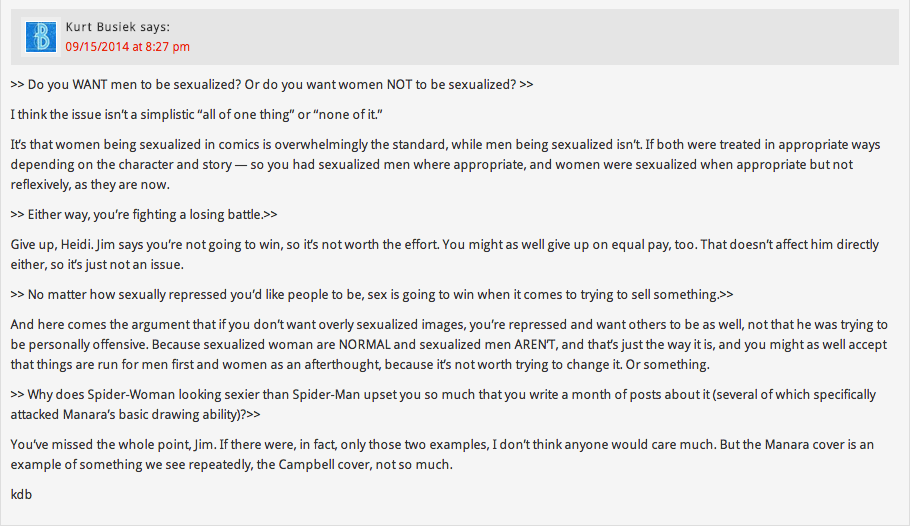 Yes, I agree, Kurt. I love the “repressed” argument. One of my favorites. Women are just such prudes! Why can’t a bunch of guys just have a little fun with drawing contorted female bodies that are somehow supposed to be representative of heroism? Come on!

I mean, yeah, all we have to do is change the staging of images like these and then they’re totally equal to their male counterparts, duh. Just imagine a few more villains in there!

I actually like the idea of trying to tap into my inner teenage boy. I’ve never met him. What’s he like?! Did he like Mean Girls as much as I did?

People are getting a little butthurt at this point. The sarcasm is reaching extreme levels.

Let’s be real for a second while we focus on this point. Most people were upset over the Manara Spider-Woman cover because it was a comic that was touted as being FOR WOMEN. Marvel has been trying to court a larger female audience, and this is how they do it? Let’s also remember that the main cover by Greg Land is rife with problems. I would have been happy to see this sort of cover on any number of titles, female or male led – at the end of the day I love Manara. But this was very much the wrong series for Marvel to slap that cover on.

Yes, we all know that Marvel is a business and sex sells. Most readers certainly don’t expect (or even want) comic publishers to wipe out sex from their books. The problem is with equality and representation. I borrowed this comment thread because it’s a pretty accurate depiction of the argument that has been hanging over the industry for too long now. Luckily, I have a solution!

For every ridiculously posed woman there should be an equally unrealistic man, and I don’t mean drawing muscles on his muscles. Put both sexes in back breaking positions if they’re going to continue to be used, and show equal amounts of bare skin if bikinis will still be used as costumes and “armor.” Comics are fantasy, they don’t need to follow all the rules. Just give the readers a ridiculous bulge for every pair of gravity-defying tits and a pair of ass-less chaps for every boob window.

If you’re not into that, then maybe just do the sensible thing and better represent women. You tell us you’re courting us. We’ve been telling you how to do it for a long time now. It’s not that difficult. Do not use women as only romantic interests, as helpless damsels needing to be rescued, as victims, as catalysts for more heroic dude action. Make. Women. Characters. That. Real. Women. Can. Relate. To. They can be fucked up and broken, they can be stubborn and willfully obtuse, they can be single, wives, mothers – they can be any of these things. Just give them character. Give them depth. Give young readers something to admire and aspire to. Give them back their humanity.

7 thoughts on “The Comments Thread: Busiek Tells It Like It Is”