As a brief introduction, Casanova #8 was one of the first comics I picked up when I started working at a comic shop in 2008. I had no idea what it was – it might have been a FCBD promo – and the title led me to believe that it would revolve around a dude boning a lot of ladies or something. Not really my wheelhouse, but the cover drew me in immediately. 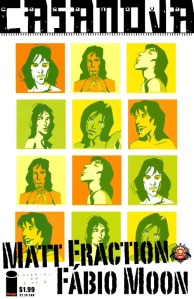 Fábio Moon and is his brother Gabriel Bá, who have both worked as artists on Casanova, are comic wünderkind. They found success quite young, and soon brought that success to an international audience. Their work on this series led me to look for more of their books, which turned up amazing stories like De:Tales and Daytripper – which remain two of my all-time favorite comics.

It’s funny to me too, that the name Matt Fraction barely registered as a comics writer back when I picked up that fated comic. Now he is among my favorite creators as well, and I can trace it all back to this single issue. An issue that I didn’t even like that much, but apparently one that I owe much to.

You can read my full review over at Comics Beat here.