Leia was the first princess who mattered to me.

Carrie Fisher — actress, feminist, author and truth-teller about living with mental illness — was not the “Star Wars” character she played. But to a girl growing up in the ‘70s and ‘80s, her portrayal of a brave, take-charge leader with a biting wit was unforgettable. I can’t imagine anyone else ripping Grand Moff Tarkin (“I recognized your foul stench when I was brought on board.”), matching fast-talking Han Solo line for line (“Captain, being held by you isn’t quite enough to get me excited.”), and choking Jabba the Hut dead with the very chain he used to keep Leia captive.

Luke got the lightsaber, but Princess Leia was the character I wanted to be. 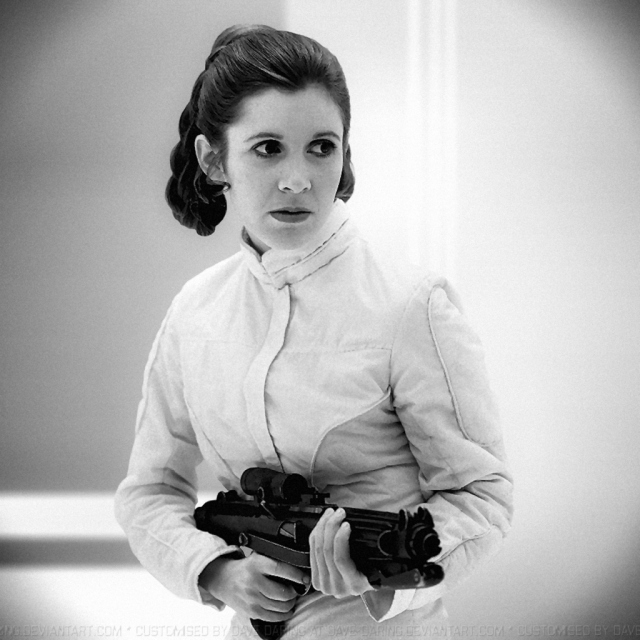 Naturally, some viewers weren’t happy about having this no-nonsense woman in a space fantasy. As Fisher told Rolling Stone in a 1983 interview, “There are a lot of people who don’t like my character in these movies; they think I’m some kind of space bitch.”

Oh, well. Count me among the “Star Wars” lovers who proudly rocked a double bun hairdo in elementary school.

Fisher was honest about aspects of the role she didn’t like, such as the infamous metal bikini from “Return of the Jedi.” However, she brilliantly flipped the script when a father of two daughters expressed shock upon seeing a bikini-clad Leia action figure in Target, complete with a chain. Fisher advised him via the Wall Street Journal to give his kids this message:

“Tell them that a giant slug captured me and forced me to wear that stupid outfit, and then I killed him because I didn’t like it. And then I took it off. Backstage.”

Beyond “Star Wars,” she wrote and spoke openly about battling the double terrors of drug addiction and bipolar disorder. In world where people still stigmatize mental illness and treat it as a failure of will, Fisher’s candor and advocacy gave many some much-needed validation and hope. “If you’re living with this illness and functioning at all, it’s something to be proud of, not ashamed of,” she wrote in her memoir “Wishful Drinking.”

Age shaming? She wasn’t having it. “My body hasn’t aged as well as I have. Blow us.”

A lot of terrible shit that had nothing to do with celebrity deaths went down in 2016 and yeah, we have bigger things to worry about. But when an artist leaves an indelible mark during your formative years, the loss can feel intensely personal. For me and countless others, this one qualifies.